Category IIA (Not Suitable For Children) 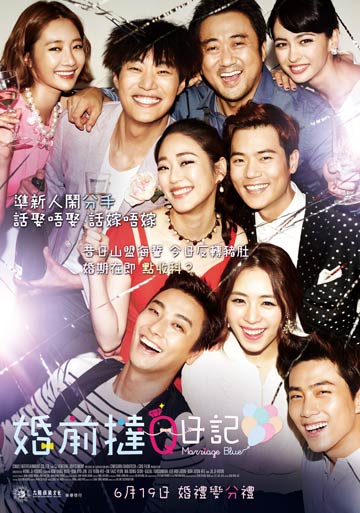 Reconciled after a long separation, Tae-kyu (played by Kim Kang-woo) and Ju-young (played by Kim Hyo-jin) plan the marriage. But Tae-kyu accidentally finds that this is not Ju-young’s first marriage and calls off the marriage… For 7-year-old couple So-mi (played by Lee Yeon-hee) and Won-cheol (played by Ok Taec-yeon), to get married each other is more than natural.

Falling into 7-year-itch So-mi takes her last travel before wedding, and these she meets fresh love.

After unexpected one-night stand, Dae-bok (played by Lee Hui-joon) learns that Ira (played by KOH Joon-hee) is pregnant. Dae-bok proposes Ira happily, but she is not sure if they’re life-long mates.

In every man’s enviousness, Keon-ho (played by Ma Dong-seok) will marry the hottest Uzbek girl Vika (played by Guzal Tursunova). Perhaps she is so sexy; Keon-ho loses his confidence as a man at night.

There’s only 7 days left for those couples, will they be able to tie the knot happily ever-after?