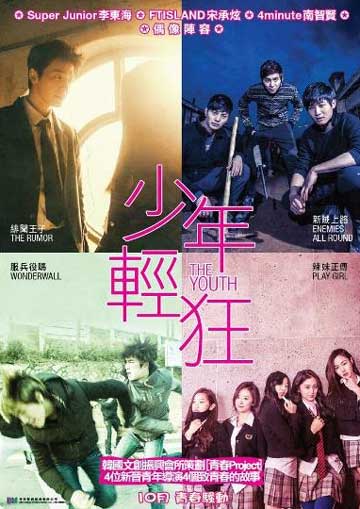 The movie project will be made up of four episodes. Each episode will feature K-pop idols and rising stars, and will strive to be commercially competitive. The projects picked were "Rumors", "Wonderwall", "Enemies All Around" and "Play Girl".

"Rumors" is about a student who starts spreading strange rumors around school, in order to become the president of the student council, and will depict the weaknesses of youth, insecurities and guilty conscience that the student faces. Super Junior member Dong-hae and INY’s Woor-in star in this episode.

The short film "Wonderwall" is the work of director Park Ga-hee, seen through the delicate eyes of a female, the movie reflects on the significance of the army training center, a place that all men must go to in order to serve out their compulsory military service, and how this significance differs according to the individual. 4Minute’s NAM Ji-hyeon stars in this one, along with actor Goo Won.

"Enemies All Around" by director Ju Seong-su. It will tell the story of three young people who consider robbing a bank to solve their insecurities about the future, and stars FTISLAND member Song Seung-hyun.

"Play Girl" will examine the world of female high school students through the lens of a male director, Jung Won-sik, and stars actresses Seo Eun-ah and Kim Sun-ah.