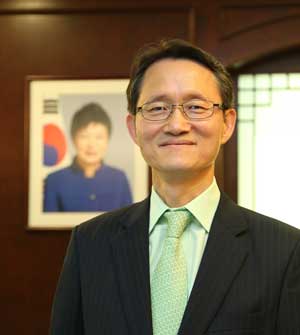 It is my great pleasure to host the 4th 'Festive Korea' in this pleasant season. Hong Kong and Korea have rapidly expanded economy and business relations in recent years. Also, after the Korean TV soap opera, 'Daesanggeum', was introduced in Hong Kong in 2005, Korean culture and arts became familiarized and popular with HK people. Now, HK and Korea are entering new phase of cooperation in terms of culture and arts. Coincidentally, this year is the 10th anniversary for the signing of MOU on Cultural Cooperation between HK and Korean governments.

In this context, Festive Korea has played a significant role as a platform for fostering the cultural exchange between HK and Korea. It has been a great joy to see a lot of HK people and organizations becoming interested in this event. For example, a big shopping mall in Hong Kong organizes its own Korea Festival in this October. Now it is not surprising that many people think of October as the month of Korean Culture in Hong Kong.

For meeting the increasing demand of Hong Kong people, this year's Festive Korea prepared more various programs including contemporary dance, opera gala concert than previous ones. I hope that it gives a great opportunity for Hong Kong people to enjoy Korean culture and arts, and contributes to making Hong Kong culturally more diverse.